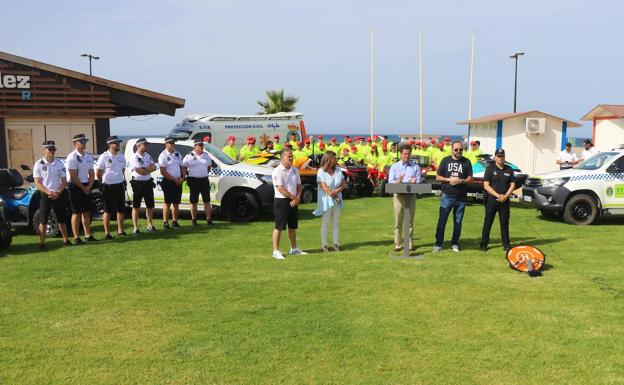 The article here the Ideal site has details of the beaches opening for summer business last Thursday. The article also mentions that there is now free wifi available on the beaches.

The device, in operation since yesterday, ends on September 11 and there will be no restrictions against covid on the beaches of the municipality except for the mandatory use of a mask in the health modules

The beach season kicked off yesterday in the municipality of El Ejido with the implementation of the Beach Plan. Device that will remain active until next September 11, Day of the Municipality, and that this year will have an increase in material and human resources.

As a novelty, this summer will bring free Wi-Fi access points at different points along the coast. Thus, it is planned that throughout the summer Wi-Fi network will be installed in six points, three permanent and three seasonal. The landlines will be located at the SOS post in front of Brisamar, at the adapted point on Poniente beach, next to the rugby field, and next to the Balerma Tower. For their part, the temporary access points will be at the adapted points on the Levante, San Miguel and Balerma beaches.

In relation to the control, surveillance and security device, the mayor of El Ejido, Francisco Góngora, pointed out that this summer he will have "42 lifeguards, a health emergency technician, a nurse, 16 surveillance posts and more Local Police patrols. than last year, a total of three, which throughout the season will be dedicated to coastal areas, to which regular daily patrols are added, with the aim of increasing police surveillance.

In this sense, this year the City Council of El Ejido has incorporated new health equipment and rescue material to expand the available resources, or renew them, and at this point, the mayor recalled that "already last year we provided all the beaches with a semi-automatic defibrillator with the aim of reducing the time of action in the event of an incident».

Regarding cleaning and disinfection, the number of operators in high season who will provide coverage every day of the week both in cleaning the sandbanks and the promenades will be 30 people, to which two drivers will be added. In addition, three 4x4 tractor vehicles will be used, two of them newly incorporated compared to last year, a screening machine to collect all types of waste and algae found in the sand, a raking machine, a scraper grader, a leveling blade and a new trailer of 8,000 kilos.

On the other hand, the 'Playas El Ejido' mobile application is once again available to report in real time on the state of the sea, capacity, characteristics and services of each of the beaches.

At this point, the highest municipal official pointed out another novelty of the 2022 Beach Plan, such as the acquisition of "two new toilets to cover the San Miguel beach area, we have acquired 135 linear meters of wooden walkways, 180 centimeters wide based on accessibility regulations to facilitate bathing for people with reduced mobility and, in this line, we remind you that we have an assisted bathing telephone to reserve this service at the adapted points».

Regarding Seasonal Services, El Ejido will have eight beach bars, six hammocks and umbrellas, three kiosks between Balerma and Poniente, a nautical area located in Levante de Almerimar and a massage area, also in Poniente.

Similarly, the mayor did not miss the opportunity to highlight the quality awards that the beaches of El Ejido have received, which already have four Ecoplayas flags in Poniente, Levante, Balerma and San Miguel; four Blue Flags, in Levante and Poniente Almerimar, San Miguel and Balerma; four Q for Quality; four Sicted distinctions; as well as four Safe Tourism Certifications and four other Andalusia Safe certificates.