If you are willing to drive a short way there are some interesting events coming up in Adra in the next couple of months.

See the article here on the Euro Weekly News site for details.

Be careful not to park on any yellow lines if you are parking in the marina,

A reader, Derek H, spotted the police handing out parking tickets yesterday. Probably in advance of the Kings parade.

Please note that other people have told me in the recent past that the police are clamping down of parking in the marina. 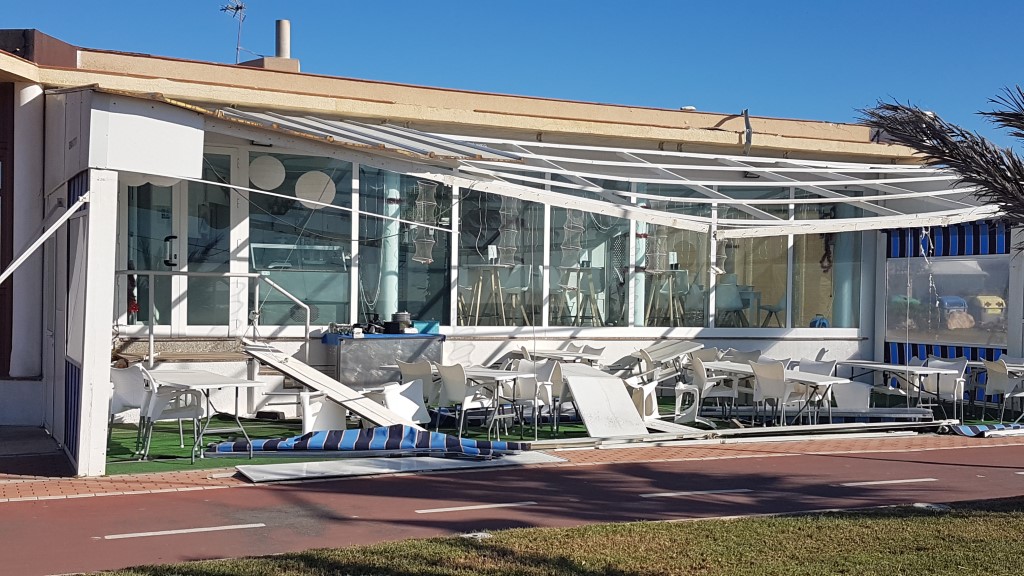 Thanks to a reader Gary S for these photos of some of the damage caused by the wind in the last couple of days.

These photos were taken not far from the beach hotel earlier today.

I was doing all sorts of stuff in the marina and elsewhere this morning. Including visits to 2 banks, a Chinese shop, the great dentist behind the Galley and the doctors.

As you can see, while down there I took a picture of the new frontage of La Plaza. It looks nice.

In addition, I was walking round Darsena 2. There were 3 different companies doing work on the frontage of shops on the east side of the Darsena. It looks like it is slowly changing from being a bit of a wasteland.

You can see a few more photos in the Gallery.

Jacqui and I were walking down to an El Ejido Bowls Club prize giving dinner at Ralph's in the square last night. On the way down I took a few photos of the Xmas decorations.

The article here on the Ideal site has details of the work that has taken place improving the kids play area near El Espigon.

Read More for a google translation of the article.

The article here on the La Voz de Almería site has details.

The article here on the town hall site has details of upcoming improvements to water supplies in the eastern park of Almerimar. For people on the main town side of the rugby pitch.

I received this information from a reader, Sonia L, yesterday

"We own an apartment in Almerimar and I am here at present. Today, Sat 26 Oct at approx 2pm my pushbike was stolen from outside the Mercadona. It was locked with another bike to the cycle rack and the cable lock was chopped!! We spoke to the staff, there is no CCTV! Police matter they said!!"

So be warned there is some bike theft going on at the moment.

Last night we had a stunning sunset here. As you can see from the photos above. I took the first two. My friend Mary B took the two photos in the marina.

Thanks to two readers, Patricia and Paul W for prompting me to investigate this subject again.....

Almost a year ago I linked to an article on the Almería 360 site about future improvements to the 409 and 411 motorway turn offs. In the article I mentioned that work was to commence in 2019.

It appears that perhaps only work on the 411 turn off was scheduled for 2019.

I remember a small piece of work being carried out there earlier this year. With part of the 411 turn off being shut off for a while.

So who knows when the work on the 409 junction will start.

Here is an update from a reader.....(19 September 2019) "I believe (but I am not 100% sure) that everything in the 2019 “presupuesto” (budget) was rejected. So then the government had to stand down and there had to be an election in April 2019. As no government has been formed since then there will be no presupuesto. Now there is going to be another election in November. A new presupuesto won’t be agreed until a new government is in place. Consequently, there is no approved budget for the road works."

Comment from me (19 September 2019): The Spanish have a system of devolved government. With budgets being set at various levels For example centrally by the main government (in Madrid). In the regions (ours is Andalucia). Then in the provinces (ours is Almería). Then in local town halls (ours is El Ejido). Finally in the Spanish version of a parish council (ours is Almerimar). So an example here is that the proposed senior school in Almerimar will paid for from the Andalucia budget. On land gifted to the project by El Ejido town hall. I think that in some cases money for a project can come from the budgets of more than one level of government. So my guess is that the reader is correct. That the lack of a central budget for Spain is probably having an impact on this road improvement project.

Read More for a Google translation of the article from October 2018 on the Ideal site.

Read more: Perhaps no date for the proposed improvements to the 409 motorway roundabout yet?

The article here on the (new) town hall website has the latest information about the proposal for a senior school to be built in Almerimar.

I think that the possible setting up of this school is driving property development in Almerimar. Particularly the building of new houses.

Firstly I asked a contact associated with the Junta Local for Almerimar, Christine G, about digital signatures. Here was the response about who can get them and how to go about it:

"Anyone with an NIE number can get a digital signature, it doesn't matter if you are resident or non resident. You have to download the form to Solicitar Firma digital, you will then be issued with a code which you have to take to the town Hall in El Ejido with your passport and original NIE number and they will activate it for you. You have to do this either the same or next day after getting the code, otherwise the code will be invalidated. You can do this in the town hall between 8 and 13.00 . You need to get a ticket at the main desk to do this."

I have asked Christina for a link to where you can download the form. Rather than me search for it myself. In case I get it wrong. I will update this article once I have the link recommended by the council. Updated: here is the link.

Secondly, the reader provided a link to the article here in Spanish about digital signatures. My thanks to the reader who provided this link.

The article here on the town hall website has details of a smarter way to pay any traffic fines you incur.

I know quite a few people who might find this information useful.

Read more: A smarter way to pay your traffic fines

The article here on the town hall website says that they are going to spend 2.3M euros to improve public lighting in the municipality. I guess this includes Almerimar.

So be careful where you park. You have been warned.

PS If you do get a parking fine be sure to pay it off quickly. One of the people I was chatting to got a 200 euro fine recently. She then only had to pay 40 euros as she paid quickly. She also said that you can pay in the town hall office in Almerimar. I think it is only certain days. If I remember rightly I think she said on Tuesdays and Thursdays.

Jacqui and I have been away for a few days. So I am only just catching up on the local news.

The article here on the town hall website is from last Friday. It is about the services on the beaches this year.

Read more: Improvements to the beaches this year

Christina G has been in touch with the following information....

There has been a change in the use of some of the council owned facilities on the ground floor of Porto Fino.

I understand that the old town hall office is to be used as a study area.

Further to the article here from November last year about changes to two motorway junctions close to Almerimar. The article explained that work would take place on the 409 (Almerimar/Copo) junction and the 411 (Las Norias) junction in 2019.

Work has now started on the 411 junction. There are signs on the motorway saying that the Las Norias exit is closed and to use other exits to get to Las Norias. I was driving that way this morning. It is OK to take this exit then head north towards the eastern end of El Ejido. However the turning south towards Las Norias is now closed. While the improvement work takes place.

As yet, there is no disruption at the 409 (Almerimar) junction. Mind you, a friend told me a week or two ago he saw a machine perhaps drilling some holes in the ground near the junction. So perhaps work has started on the foundations for the new bridge that is going to be built. I guess we will just have to wait and see.