This is the rolling coronavirus story for Tuesday 31 August 2021

Less than 100 positives to close August, the month with the most deaths in the summer

The province is unable to reduce the total number of cases in August with more than 6,000

The last epidemiological part of the month of August has arrived in the province of Almería with mixed sensations, because although the second consecutive day has been registered below 100 positives detected in 24 hours, the global data for the month do not invite optimism and they are at the level of July, the worst month so far since the third wave that ended in February.

This is stated by the Ministry of Health and Families of the Junta de Andalucía in its daily update of the Covid Portal of the Andalusian Institute of Statistics and Cartography (IECA), where Almería today has 97 new infections in the last 24 hours, raising the Total positives for coronavirus detected in the province since March to 68,217.

The data from the last day of August also allow us to take stock (in the absence of knowing the epidemiological figures for this Tuesday, the 31st, which will be released tomorrow) of how the fifth wave of the coronavirus has evolved in the province and, despite the considerable reduction of positives detected during the last week, the figures for August are very similar to those collected last July, when the fifth wave exploded.

Thus, if in July there were 6,150 cases of covid diagnosed among residents of the province, this August there are already 6,092, which leaves a figure very similar to that of the previous month.

For its part, in the section of deaths, where today the province has once again added a death among covid patients and there are already 899 in total, the data for the month of August is the worst recorded since last April.

This is the case because in the last 30 days, 52 people have died in the province, which is 40 more than the 12 registered in the month of July; 48 more than the four of June and 25 more than the 27 that were notified in May. Only April, with 61 infected deceased, exceeds the fateful month of August in which Almería has stood out compared to the rest of the provinces for its high mortality rate among covid patients.

On the other hand, as for those hospitalized, Health has reported today 21 more admitted in the province, of which five have needed to be admitted to Intensive Care. In addition, it should be noted that the number of recovered far exceeds that of positives, since in the last 24 hours 327 from Almeria have received epidemiological discharge, which leaves the number of active cases, that is, of people who are currently infected , at 5.112.

For its part, Andalusia registers a total of 980 infections this Tuesday, August 31, the first time in three months that fewer than a thousand cases have been counted since there were 938 positives on May 18, a reduction of 379 cases compared to the day before and 929 less than those reported seven days ago, according to the data provided this day by the Ministry of Health and Families, which counts 19 deaths, ten more than the previous day and 34 less than a week ago.

El Ejido now has 228.0 cases (approximately 14 more than yesterday) per 100,000 inhabitants based on the 14 day average (red for increase; blue for decrease)

Poniente Region now has 234.2 cases (approximately 2 more than yesterday) per 100,000 inhabitants based on the 14 day average (red for increase; blue for decrease) 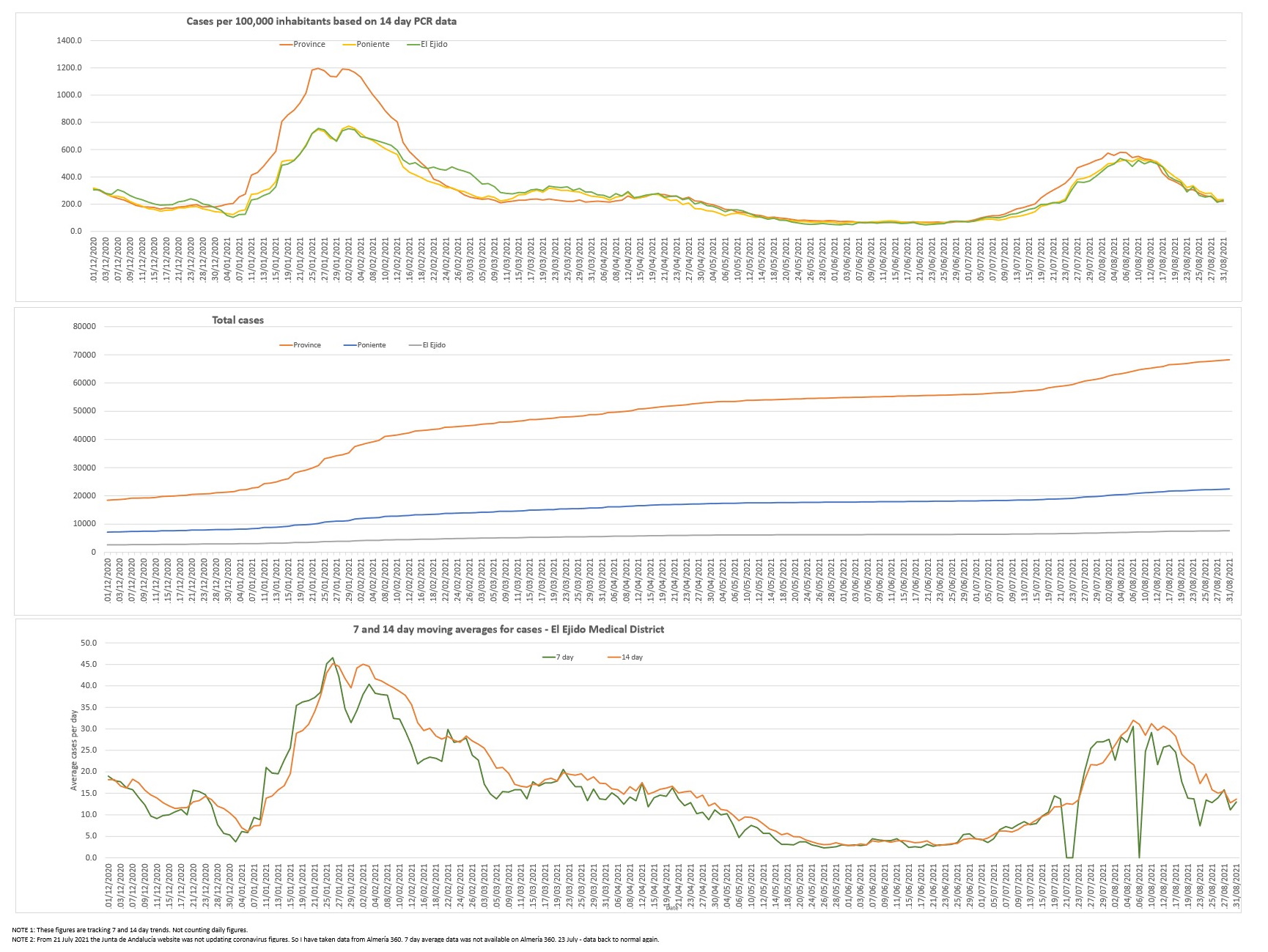 69.5% of the full Spanish population (including under 12 year olds) have been vaccinated fully - 0.4% more than the last published value

87.7% of people in Andalucía aged 12 and over have had at least 1 vaccination - 0.2% more than the last published value

80.1% of people in Andalucía aged 12 and over have been vaccinated completely - 0.6% more than the last published value

78.3% of people in Spain aged 12 and over have been vaccinated fully - 0.4% more than the last published value 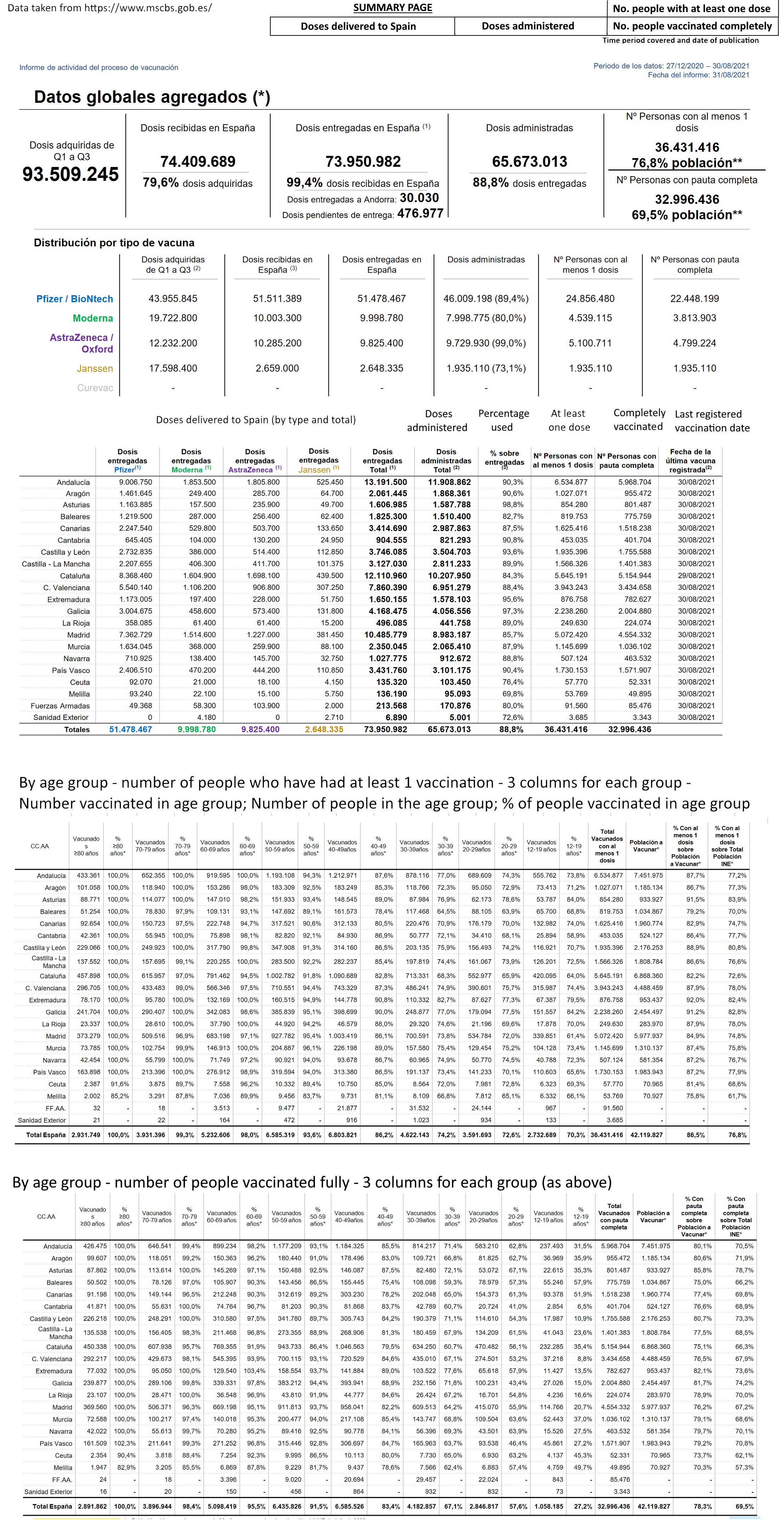