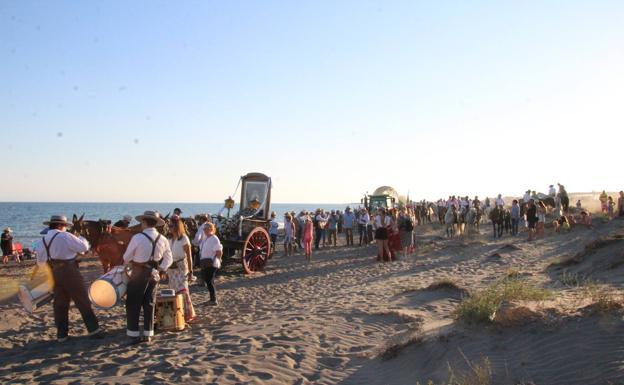 The article here on the Ideal site has information about a pilgrimage on the beach recently.

Hundreds of rocieros return to make Almerimar their meeting place

The Brotherhood of the Virgen del Rocío of El Ejido lives, after two years of absence, the return of its pilgrimage with emotion and joy, looking at the 'Blanca Paloma'

There are many events that are recovering two years after the covid-19 pandemic broke out. On Saturday afternoon that return was carried out by the Pilgrimage organized by the Brotherhood of the Virgen del Rocío in El Ejido, next to the Town Hall. An act where the emotion of the return is united, with the joy of a day of coexistence and the devotion for the 'Blanca Paloma'.

At six in the afternoon, officiated by the parish priest Roberto Rodríguez, also a brother of the Brotherhood, the religious act began in the Guardias Viejas Parish Church. While the interior of the temple was filled with pilgrims and members of brotherhoods and fraternities of El Ejido, accompanying, outside, the carriages and horses surrounded the church guarding the carriage with the painting of the Virgen del Rocío, which presides over the church every year.

In total, 187 horses and 32 carriages participated in this pilgrimage, almost all of them from the province of Almería, although there were also some from Málaga or Jaén. Also, this edition also had the presence of a representation of the Brotherhood of Santander.

The Big Sister of the Brotherhood of the Virgen del Rocío in El Ejido, Margarita Alcaide, expressed the joy of reliving these moments. «There is a lot of joy, illusion and hope that everything will turn out well. People were very excited after two years and the horsemen above all », while she explained that with this Pilgrimage what they are trying to achieve is« transfer a little bit of Rocío to our land ».

In this sense, the Brotherhood of El Rocío de El Ejido was born in 2014 and currently has 473 brothers.

After seven in the evening the Pilgrimage began from the Guardias Viejas temple. The entourage went down to the beach to make a brief tour before having to take the road to Almerimar, to avoid an area through which the cars could not cross.

The return to the sand of the beach took place in front of Residencial San Miguel, with carts and horsemen passing by the sea to the surprise and enjoyment of the thousands of bathers who at that time were still enjoying the summer afternoon and evening on the beaches of Almerimar . It didn't take long for them to start taking out their phones to record video, take photos and even take a selfie with what, without a doubt, was quite a show.

The pilgrims advanced in the direction of the Sagrada Familia Church in Almerimar, where, as every year, the floral offering was planned. A path that ran animated by the sound of flutes and drums from rocieros, also of guitars, and the songs that the participants did not stop interpreting to lighten the path.

Three were the stops that were carried out to unify the group, after in some areas the cars had difficulty moving forward, since the wheels were stuck in the sand.

After nine o'clock at night, the pilgrims arrived at the church of Almerimar, where they carried out their traditional floral offering to later go to the esplanade next to the Puerto Vino beach bar, set up for the celebration of the Rocío coexistence between all the attendees until the wee hours. at dawn and in which at midnight the festivities stopped to pray the Holy Rosary.

The mayor of El Ejido, Francisco Góngora, who attended the beginning of the pilgrimage, together with the mayor of Berja, José Carlos Lupión, pointed out that "it is a long-awaited activity, especially for devotees of the Virgin, and that attracts numerous people from other regions and even from other provinces, such as Malaga and Granada, by encompassing religious, cultural values ​​and Andalusian popular tradition». All this, without forgetting the spectacle that it meant for tourists to discover an event of this type on the beach and that through its images can be safely known in many parts of the national territory.