Picked this up from the Tiempo Libre Facebook page.

Read More for a Google translation of the text that went with the picture. About how to inscribe for this event that appears to be free.

The article here on Ideal site has details of the upcoming Sun Market event. There appears to be some confusion about dates between the posters and the article on the Ideal site. I have been informed that the posters are correct. The event will take place on Friday 17 and Saturday 18 August 2018.

Thanks to Irene from the tourist office for sending me a copy of this poster.

As you can see, there is a parade of old cars taking place tomorrow night.

Thanks to Juan P for these videos of the leaving do for Idris and Shirley at Mario's last night.

Our friend, Shaun P, is looking for a video of the poem being read out last night. If anyone has a video of this please can you get in touch.

The article here on the Ideal site has details about the imminent arrival of the pirates. The article was published on Thursday 2 August 2018.

Read more: More about the pirates....

I have been asked to advert the above.

Just spotted the poster above on the Almerimar Junta Local Facebook page. The pirates are coming soon.

Irene from the tourist office in Almerimar has sent me some details of August events. Thanks Irene.

We had a quiet night in last night after a heavy Sunday. So we missed the Virgen del Carmen mass and parade yesterday. I copied the photo above from the El Ejido Es Mi Prioridad Facebook page.

The El Ejido Es Mi Prioridad Facebook page has lots of photos from the slippery pole competition yesterday. Here are a couple of them.

We had a busy day yesterday. First we played Friday golf. Followed by a meal out at El Tiburón last night.

According to the list of events in the Virgen del Carmen magazine this square (just behind El Espigon) was the focus for summer events in Almerimar last night.

We were quite hungry so we got to the restaurant at about 8:30pm. Pretty early compared with the majority of people that eat there. This was a good thing as the vast majority of the tables both inside and outside the restaurant were reserved.

According to the list in the magazine, events were supposed to start at about 9:30pm. While we were having dinner there were people setting up the stage for a musical event later. A few of the people who were performing later did a sound check. They all sounded very good.

At around 9:30pm a street band called Charanga turned up in the square and started playing. The video above is of one of the songs they played.

By around 10:30pm the main events on the stage in the square were about to take place. Sadly Jacqui and I were shattered after a hot day in the sun playing golf. So we decided to take a walk along the prom then meander back home. So we missed the main music of the evening. However we enjoyed listening to Charanga.

UPDATED: Here is a link to some photos from later in the night from  the weekenjoy website.

If you click on the image above it will take you to the online version of the 2018 fiesta book for the Virgen de Carmen celebrations in Almerimar.

I got the link from the Almerimar Facebook page. 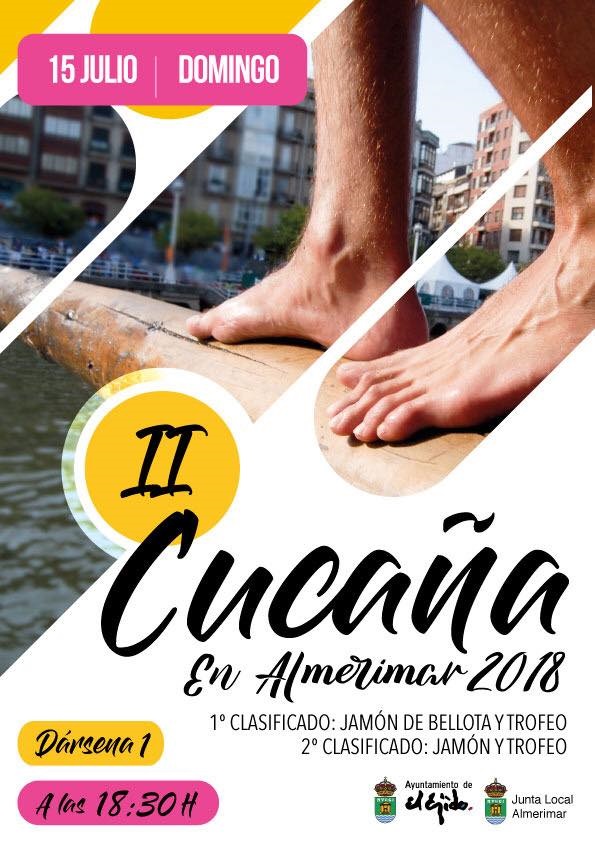 Just spotted the poster above on the Junta Local de Almerimar Facebook page.

Sunday 15 July is the day for the Virgen del Carmen golf competition (with the fiesta itself scheduled for Monday 16 July). Plus it is finals day for the men at Wimbledon. Plus the final of the world cup starts at 5pm on Sunday.

I wonder if this event was organised before or after Spain got knocked out of the world cup?

Further to the article earlier with Almerimar events for the first week in July 2018.

Thanks to the tourist office, Christina G and the Junta Local de Almerimar for the information posted above about events this summer. Click on an image to see a bigger version.

In typical Spanish fashion the Junta Local for Almerimar has published the events for the first week of July on their Facebook page on the second of July. The poster above was lifted from the Facebook page.

Another thing picked up off Facebook. This time from the Almerimar sailing club.

I spotted this poster on the El Ejido Sports Institute Facebook page.

I spotted a link on Facebook to the page here on the town hall website. It has details of the San Isidro festival at the end of June.