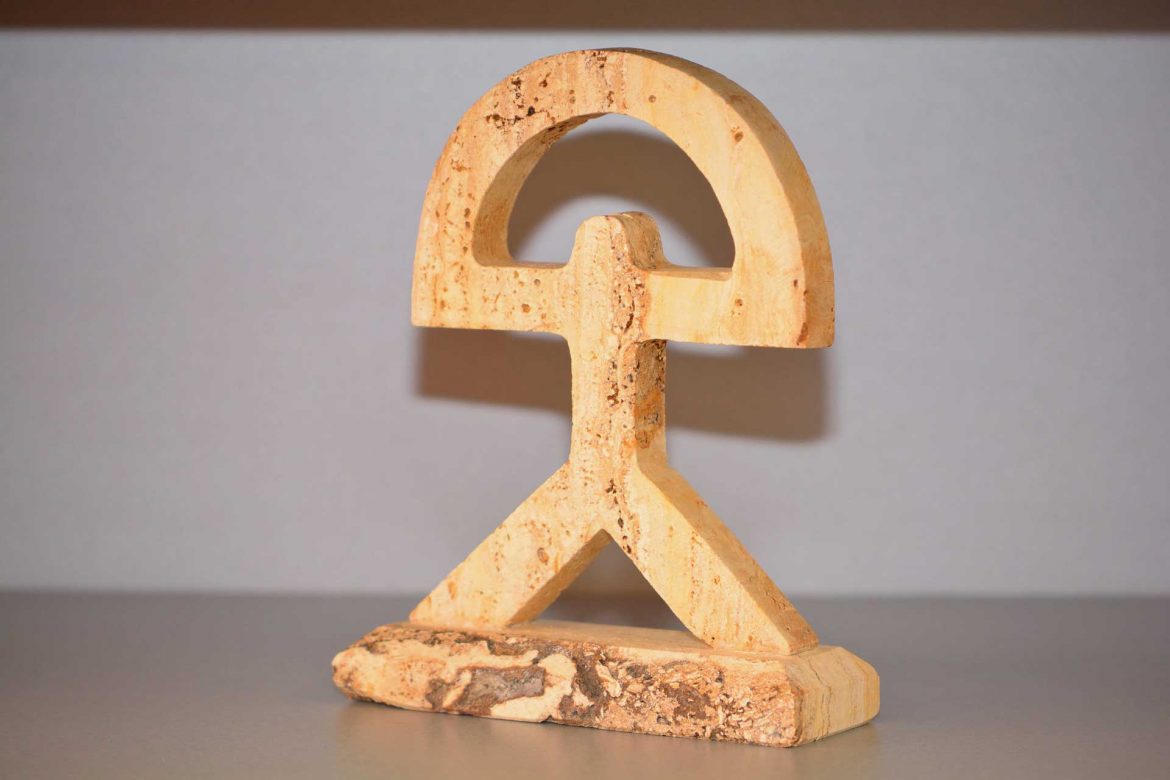 The article here gives some history about the Indalo. It is worth taking a look at the Spanish article to see some good photos.

Curiosities about the popular Indalo of Almería

The Indalo is the most emblematic symbol of the province of Almería, and that is why it is recognized throughout Spain and around the world. The Indalo is a much more popular symbol than the Portocarrero sun.

Many items in the shape of the Indalo are sold daily, whether they are earrings, bracelets, pendants, decorative figures, t-shirts and much more. The Indalo is the best-selling souvenir in Almería, in whatever form it takes!

What is the history of this symbol?

The Indalo is a local symbol that, although it has a lot of impact today and has had it over the years, takes us back to past times, more specifically to the Neolithic. We find its origin in the Cueva de los Letreros in Vélez-Blanco. This cave with cave paintings is one of the most important found in the entire peninsula. Cueva de los Letreros was discovered by Manuel de Góngora y Martínez, an archaeologist from Almería raised in Tabernas who discovered the Indalo in the 1960s.

This iconic figure in our city dates from the Neolithic or the Copper Age. Cueva de los Letreros has been declared a National Historical Monument and a World Heritage Site, classified within the cave art of the Mediterranean arc of the Iberian Peninsula.

What is the Indalo?

In the figure of the Indalo we can see a human raising a bow, but what does this mean?

The term of the Indalo comes from the name Indalecio and its meaning could come from the word "Indal Eccius" within the Iberian language. Its meaning is as follows: great, strong, powerful and protective god.

In any case there is no clear meaning, thanks to abstract language there are infinite possibilities, and any interpretation that has been given to it could be valid.

The literary group of the Indalian movement interpreted this symbol with the following theories, since it does not have a definitive meaning:

A hunter in prehistoric times with an outstretched bow.
A deity in the religious aspect.
The representation of a person with a rainbow referring to protection against evil.
Jesús de Perceval was the main precursor of this symbol, so he was the protagonist in naming the literary group. The Indalians adopted the theory that this figure symbolized a union pact between man and the gods to avoid the floods.

Little by little this symbol was gaining strength and finally became the most representative symbol of our province. Finally, it ceased to be a symbol used only by the inhabitants of Mojácar.
the indalo symbol in a hotel

Currently, this symbol is seen all the time, whether in sculptures in the city, in car stickers, in stores, in brands, and much more. Wherever you go, this symbol will always be present, even when you leave our province you can still see it.

If you are interested, you can visit this cave painting in the Cueva de los Letreros, in the municipality of Velez-Blanco. Within the website of the Vélez Blanco town hall you have different guided tours at your fingertips.

The Indalo in the world of Almeria cinema

For movie lovers, the Indalo symbol appears in some scenes from the movie Conan the Barbarian. This classic engraving in our province is played by Arnold Schwarzenegger, who appears in makeup in a scene with multiple indalos pretending to have a ritual tattoo.

The Guinness Record of the Indalo

On October 26, 2019, Almería won a Guinness record thanks to the Indalo. The prize is held by the largest heart of vegetables in the world, which has an Indalo inside. This work was made by hand with local products from our land, in which we found 20 tons of tomatoes, yellow and green peppers, pumpkins, courgettes and aubergines. In total it occupied 603 square meters and many countrymen from the area, entities and companies participated in this project.