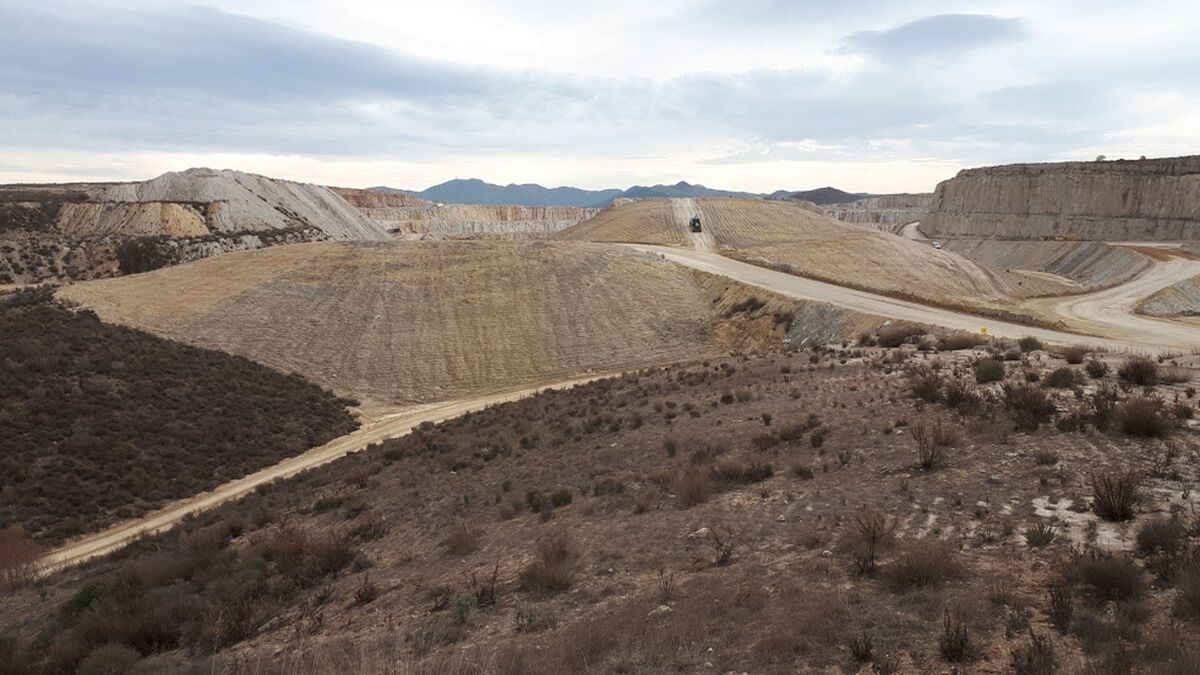 Almería province produces around 70% of Spanish gypsum. According to the article here on the Diario de Almería site.

The six farms in the province export 9.1 million tons (worth 59 million euros) of the 9.9 from Andalusia and 13 from the country. The sector generates 700 jobs

Almost in silence, without the visibility or projection that other leading productive sectors in the province may have, such as the Almeria agri-food miracle or that of natural stone, Almería has become, so far this century, the most throughout Europe and has not stopped growing in recent years with a production that already reaches 70% of the national total. And it is not for less, the province has the largest deposit on the entire planet, that of the Sorbas Basins, whose future reserves even exceed those of the gypsum mines of the United States, which is the world's leading producer.

According to the annual reports of the Geological and Mining Institute of Spain, the Almeria quarries had been producing an average of over five million tons of powdered gypsum in the last decade, a statistic that in 2020 reached 9 million with a market value close to 60 million euros. In that year, production in all the active farms throughout the country was 13.3 million, 18% more than in the previous year, of which 9.9 correspond to the 23 gypsum mines in Andalusia with a value of of nearly 64 million. In the United States, 22 million tons were registered, followed by Iran and China with 16 each. Worldwide, around 150 million tons were exported, although this volume of production in previous years has been above 260 million.

The province of Almería, with six active farms, contributes, both in relative weight and in value, almost 70% of the national production of gypsum and 95% of the community (and almost half that of the United States), a figure that places it as the most producing territory in Europe and one of the main worldwide. The general secretary of the Technical and Business Association of Plaster (Atedy), Yago Masso, highlights the potential of mining as a generator of employment in the province: "The contribution of mining to the revitalization of labor in the area is undeniable and there is a cultural roots between Almería and the mines. In addition to the fact that there has been a significant increase in mining production in the region in recent years, with which the generation of employment will continue to rise in the future”.

According to data from Atedy, an organization that held a general assembly in the province for its contribution to the sector, farms in Almería add around 700 jobs. In 2016 there were 5.6 million metric tons of the 5.9 in Andalusia and 8.9 in the entire country. That year there were four mines from Explotaciones Río Aguas (a subsidiary of Grupo Torralba), 3 from Saint-Gobain Placo Iberica and 1 from Yesos Millán. Subsequently, other multinationals of weight in the sector have been landing in the quarries of the province, such as Lafarge, Etex and Knauf Ibérica, which opened the most modern laminated plasterboard factory in Spain in Escúzar (Granada).

In previous years the average was between 4 and 5 million, so far from disappearing, the sector has grown in production, which is on track to double, and in turn in sales and wealth generation. The gypsum deposits of Almería, in addition to being among the largest in the world, have the advantage of their great purity and proximity to the shipping ports of the capital, Garrucha and Carboneras. Placo Saint-Gobain's gypsum mineral exploitation is based on three quarries located in Los Yesares (Sorbas), María Morales (Tabernas) and El Cigarrón (Almería). The one they have in Sorbas, whose extractive activity began in 1973, is the most prolific in the entire planet with an annual production capacity of five million tons.

These three deposits that Placo Saint-Gobain has in the province reach a reserve of 500 million tons of very high purity ore with highly efficient production and logistics operations, complying with the highest international standards in terms of safety, environment and Energy. The Torralba group also exploits deposits in Sorbas and Tabernas. The gypsum in the area is of the selenite type, whose appearance is that of an aggregate of large crystals, notable for the few intercalations it presents and its high purity.

Gypsum is one of the most widely used minerals in the world both in construction, due to its excellent bioclimatic, insulation and aesthetic properties, as well as in ceramics for making molds, sanitary fixtures and sculptures, in agriculture to improve land of cultivation as fertilizer and desalinizer, in medicine for traumatology through bandages and surgical and dental molds and also in the chemical and pharmaceutical industry.