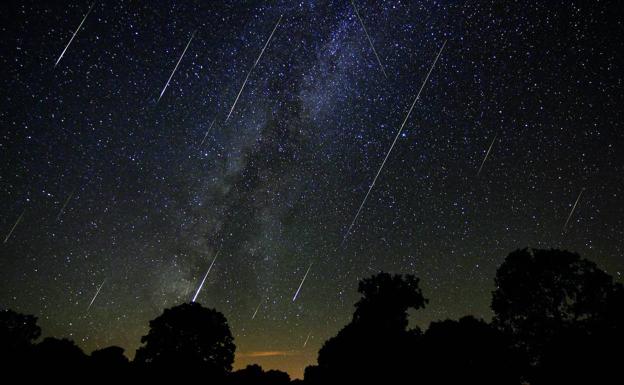 The article here on the Ideal site says where in the province you will be able to see some shooting stars in the next couple of days.

Almería, the best destination to see the Perseid meteor shower

In the Tabernas Desert, Sierra de Los Filabres or through the Hydroelectric route you can see the stars from August 11 to 13

The sky of Almeria prepares for the arrival of the Perseid rain or tears of San Lorenzo; a desired time of the year since it offers the opportunity to see shooting stars to those who have never had the opportunity and, in addition, it will serve to make a wish. This phenomenon usually begins on July 17 and ends around August 24, although it has its maximum activity on the nights of 11 to 13 of this month. However, depending on where you are, it is difficult to visualize this shower of stars due to excess luminosity. The Tabernas Desert, Sierra de los Filabres, Sierra de Gádor or Sierra Alhamilla are some of the idyllic settings for this occasion.

From the National Astronomical Observatory, dependent on the National Geographic Institute (IGN), they warn, however, that this year will be bad to observe the Perseids since its maximum will occur coinciding with the full moon, which will make it difficult to observe the meteors. The best option to view the Perseids is, therefore, to move away from urban centers and go to dark places, with little light pollution, such as the outskirts of the city or towns. It is also preferable to be in places that have a certain height.

Another factor that must be taken into account for this phenomenon to be successfully visualized is that the skies are clear, since the clouds would make it difficult to see. Luckily, there is no rainfall alert in the province and the forecasts suggest that the skies will be totally clear during the early morning.

Once the weather and accessories have been checked, although no special equipment is needed, many choose to bring binoculars or a telescope that allow them to view any celestial element perfectly. It's time to get going. Almería has corners that will allow you to see the 'Tears of San Lorenzo'.

The Tabernas Desert is one of the places that offer the possibility of seeing the meteor shower far from the capital. This enclave, which has been the scene of the filming of westerns, offers the perfect conditions to spend the night watching the sky. Although special precautions must be taken and not approach the towns, since these would make it difficult to see the stars.

The Calar Alto Observatory is located in the Sierra de Los Filabres, which has the largest telescope in continental Europe, has height, clear skies and is perfect for the long-awaited rain. It is not necessary to go near the domes, since there will be staff working like every day and the presence of lights hinders their work. It is better for the esplanade that there is before reaching the observatory, by Gérgal and Aulago, in order to avoid noise and inconvenience from those who come there to contemplate the Perseid shower.

On the other hand, the Sierra de Gádor extends 52 kilometers through the southwestern part of the province and, thanks to its altitude, will offer a unique interaction and view of this much-persecuted rain. The Sierra de María has also become one of the natural spaces that, thanks to its height, allows the people of Almeria to see the meteors during the early hours of the morning.

The Cabo de Gata-Níjar Natural Park is another enclave to see the Perseids, as well as the well-known coves that are located along the coast of the province and that are perfect proposals, far from urban centers, to see the sky adorned by these shooting stars.

Another of the alternatives is to take the path of the Hydroelectric, in Laujar de Andarax. With an approximate distance of six kilometers, this route will allow the most adventurous to enter a unique terrain. The route takes users to an approximate altitude of 1,140 meters, offering low light pollution conditions to contemplate the sky from this route. It is done in four hours, with low difficulty, and is postulated as a succulent option.

Increasingly, the population expects the Perseid meteor shower as May water. Popularly known as 'Tears of Saint Lawrence' due to its proximity to the festival of the martyr of the same name, it is a phenomenon that originated in comet 109P/Swift-Tuttle. Precisely, its name is derived because the comet 109P/Swift-Tuttle and its trail are near the Perseus constellation.

Every year in early August, our planet crosses the orbit of Comet 109P/Swift-Tuttle, which has a period of 133 years and last passed close to the Sun in 1992.

This orbit is full of small particles, such as grains of sand or smaller, that have been released by the comet in its previous passages. When one of these particles enters the Earth's atmosphere at high speed, specifically, at more than 210,000 kilometers per hour, friction heats it until it vaporizes at high altitude.