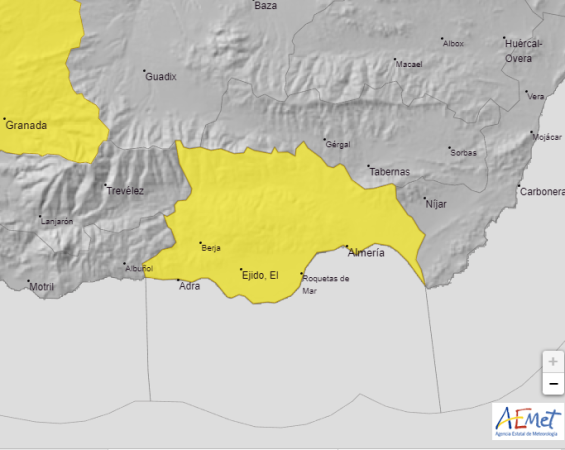 The article here on the Almería 360 site has details of a yellow high termperature warning for our area from 13:00 today.

Starting at one in the afternoon this Thursday, the State Meteorological Agency, AEMET, will activate the yellow warning for high temperatures in the Poniente and Almería capital. At that time it is expected that the thermometers will mark 38 degrees Celsius and may even reach 39. The warning remains until 9:00 p.m. At night the thermometers will not drop below 27 degrees.

In the Alpujarra it will be a little less hot, 34 degrees, as in Los Vélez, Campo de Tabernas and Nacimiento, 33 degrees. In Levante they will not exceed 31 degrees.

As for the wind, today it blows east in the first part of the day throughout the province, with an intensity of 20 to 25 kilometers per hour. By the end of the day the wind will have shifted in some areas.

The forecasts for the rest of the week are for a gradual drop in temperatures, which will go from 37 to 35 for Friday in the capital, 33 during the weekend. On Monday 32 degrees are expected and back to 37 next Tuesday, August 9.

In Cabo de Gata and Levante beaches, the temperature will be constant from this Thursday until next Tuesday, with values ​​that will range between 30 and 32 degrees maximum, and 26 to 24 minimum. The wind will blow from the east every day with a maximum speed of 25 kilometers per hour.

The Alpujarra is also expected to maintain the temperature until Tuesday with a record that ranges between 34 degrees this Thursday, up to 32 next Monday.

In the inland regions there is no forecast of major changes either. The 36 degrees this Thursday will only have a truce, on Sunday they will not exceed a maximum of 33 degrees.